Did you know about our 90 Day Play Better Guarantee and Lifetime Trade In Program?

Converting to a Wedge? Here's an Overview of our Cornet Mouthpieces
We offer American and British style cornet mouthpieces.

Cornet mouthpieces made by American manufacturers such as Bach and Schilke are typically their trumpet cup on a cornet backbore. They produce a relatively bright, focused sound. They are best suited for Dixieland jazz and concert band settings, and are often uses as piccolo trumpet mouthpieces. 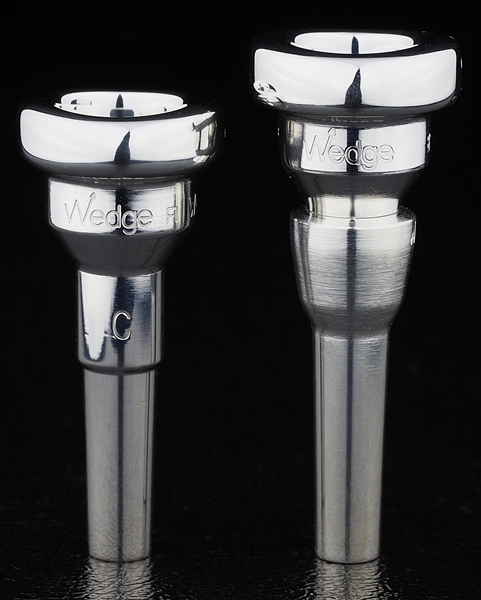 Rim Diameters
The current Gen 2 Wedge cornet rims are named according to the inner diameter (ID) of the rim measured in the long, vertical axis at a depth of .04 inches into the cup.

For example a 66 series rim measures 0.660 inches at that specific point. Keep in mind that manufacturers measure their rim sizes at different points, so the ID often does not translate between brands.
How Do I Know Which Mouthpiece is Right For Me?
Picking the right mouthpiece can be a complicated process. Below we've detailed the systematic approach Dr. Dave takes when fitting players one on one.

Step One: Do you think you are close to the right size with your current mouthpiece?

1) Is the mouthpiece I am using designed for the type of playing I am doing?
2) Is my current mouthpiece basically working well for me most of the time?

If the answer to both these questions is "YES," you are probably using something close to the optimal size, and can likely head directly to our Comparison Tables to select a Wedge mouthpiece size comparable to your current mouthpiece.

*Please note: If you mouthpiece doesn't appear in our comparison tables, you can often get a good match by finding a mouthpiece that is similar to yours and choosing the corresponding Wedge.

*Please note: If you are trying to match an American style cornet mouthpiece you can use the Trumpet Comparison Tables to find the comparable trumpet top to add to a regular cornet backbore.

If the answer to one - or both - of these questions is "NO," continue on to Step Two below.

Step Two: What would you like to gain from changing your mouthpiece size?

If you are finding you are having some more serious playing issues, you may be playing the wrong size altogether.

Establish what it is you are looking to gain, such as:
* Better range
* Greater endurance
* A different or generally improved sound

Once you have established what you are looking to change, you are ready to select your mouthpiece size and options. Below is all a comprehensive collection of all the information you should need to make your selection.
Assessing Your Sound 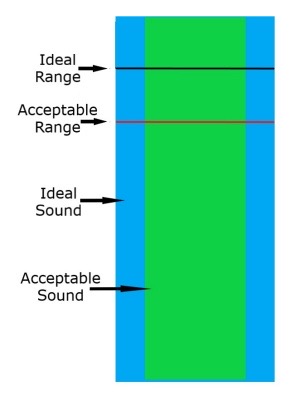 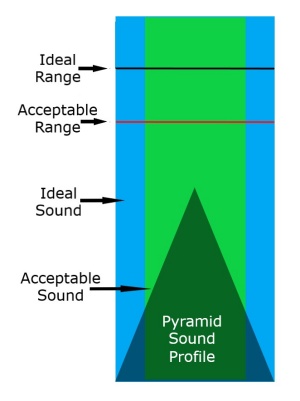 The most common problem players report to us is a sound that is big and fat in the mid to low register, but small, strained, and limited in the upper register. Their sound is shaped like a pyramid. It has a broad base, but does not extend as high as they would like, as depicted in the "Pyramid Sound Profile" graphic. Compare the breadth of sound between the lower and upper register, and note their range.

You can see that there is an imbalance. The sound is broader than what is expected or required, and their range is not optimal or even acceptable. 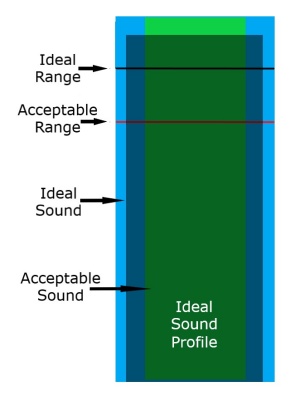 A far more desirable sound profile is shown in the "Ideal Sound Profile" graphic. The breadth of sound and range are both in the ideal range. 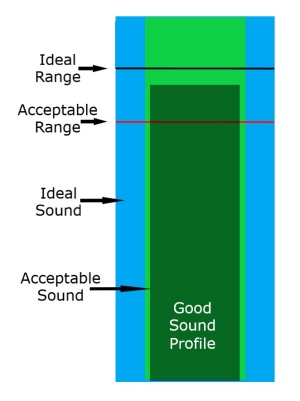 Unfortunately, there are few things that are ideal when it comes to brass playing, and especially when it comes to mouthpiece selection. Rather than playing the "perfect" mouthpiece we play the best mouthpiece possible based on a series of decisions we make and compromises we accept in the playing characteristics of a mouthpiece. Our goal should be to arrive at the best balance of sound and other playing attributes in a mouthpiece. The result is a sound profile that looks like the "Good Sound Profile" graphic.

Players switching to a Wedge mouthpiece will often get a more even response between the registers. In many cases players with a pyramid sound profile can balance their sound even more with a slightly smaller mouthpiece.
What mouthpiece should I choose for better range?

You might also have better range with a shallower cup, but that usually comes with a brighter sound. If you are using a British cornet mouthpiece such as a Wick 4 it might mean switching to something similar to a Wick 4B cup. A player using a Bach, Schilke, or Yamaha American style mouthpiece could choose a slightly shallower model using the Trumpet Mouthpiece Comparison Table for their brand. How much shallower you want to go is therefore a trade off, and depends on the depth of your current mouthpiece and what it is used for.

What mouthpiece should I choose for better endurance?

Most players will have better endurance with a Wedge similar to their current mouthpiece. One way to get an even more endurance is, as in the case of range, to change to a slightly smaller diameter.

This is especially effective if you are currently using a fairly large diameter like a Bach 1- 1/2C or similar, or Wick 3 British cornet size, with a  .670 inch (17 mm) rim diameter.  Changing to a slightly smaller diameter usually does not have a significant effect on your sound. It will not make the sound significantly brighter, but can make it a bit more compact, or not as big and broad in the middle to low register at maximum volumes. However, as brass players we don't usually have a problem being loud enough. We do sometimes have trouble with endurance, so a slightly more compact sound at maximum volumes can be a good trade off for better endurance. Example of this strategy would be a player using a Wick 3 moving to a Wedge similar to a Wick 4, or a player using a Bach 1-1/2C switching to a Wedge similar to a Bach 5C.

One other disadvantage of switching to a smaller diameter can be a loss of flexibility. The Wedge rim usually increases flexibility, so a slightly smaller size is usually not a problem.

Endurance in the upper register can sometimes be improved with a shallower cup. However, unlike using a smaller diameter, this does make the sound brighter. This may or may not be desirable, depending on the playing situation. As usual, we are dealing with a series of trade-offs or compromises in selecting mouthpiece options. In order to find a mouthpiece with an ID smaller than yours visit our Comparison Tables.
What mouthpiece should I choose for a darker sound?

There are three ways to get a darker sound.

1) Using a Deeper Cup - Here are a few points to keep in mind.
* Sound is mostly determined by cup depth and shape.
* Increasing rim diameter without changing cup depth does darken the sound very much.
* Using a deeper, more V-shaped cup will darken the sound and produce a bigger low register.
* The disadvantage of a deeper, more V-shaped cup is that it can reduce range and endurance.
* One way to preserve better range and endurance with a deeper cup is to use a slightly smaller diameter.
* Using a smaller diameter with the Wedge mouthpiece is especially effective, because it does not have the usual effect of decreasing flexibility, and players still get a bigger sound from the smaller mouthpiece when using the Wedge design.
2) Adding Mass to the Mouthpiece

You can add mass to a British cornet mouthpiece by adding a tone modifier.

The added weight dampens the brighter overtones and makes the sound darker. It also makes slotting more secure. Heavier mouthpieces are slightly less responsive, so articulation is not quite as crisp, especially with multiple tonguing. 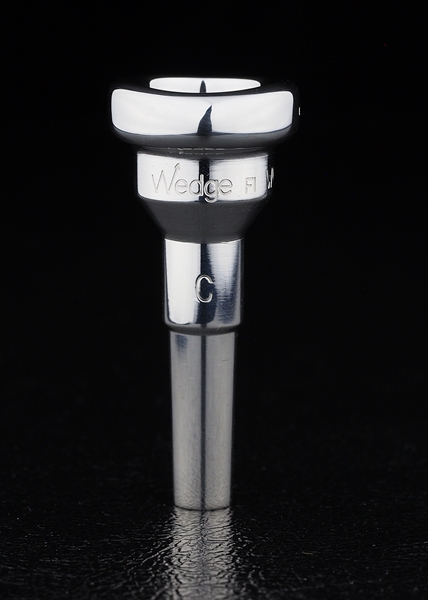 *Two piece models have a top and separate shank
* Tops are available in silver plated brass, clear Acrylic or black Delrin plastic.
* Tops can be used with specific shank for British cornet, flugelhorn, or trumpet
* Optional 5 or 10 degree angled rim on two piece models for players with overbite 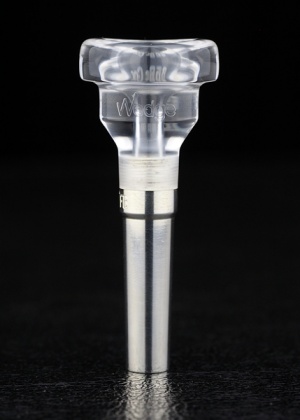 We offer the cup depths: Shallow (for Soprano cornet), Medium (similar to Wick B cup), and Deep (similar to deep Wick cup). 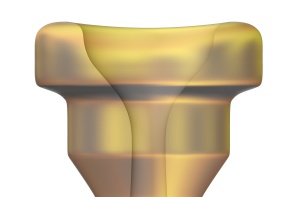 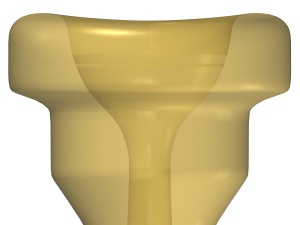 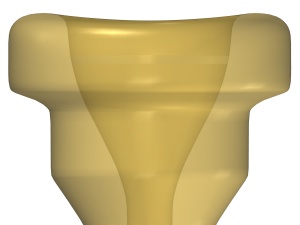 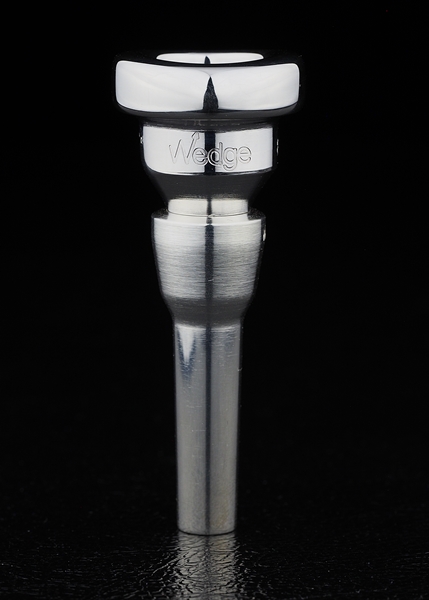 These are similar to Bach, Schilke, and Yamaha regular cornet mouthpieces

You can make an American style Wedge cornet mouthpiece by combining a regular Wedge cornet backbore with either a Wedge Regular Cornet Top or with a Wedge trumpet top.

Effect of Throat Size - Throat size is the major determinant of blow resistance.

Larger Throats:
* Feel more open
* Have wider slots
* Produce a broader sound
* Make it easier to bend the note
* Produce a more resonant low register
* Cause some players to go sharp in the upper register

Which is the best throat size option for a Regular American style cornet mouthpiece?

The Angled Rim is an option feature added to the basic Wedge rim. It is not an essential element of the Wedge design.

Most players do not need an angled rim. Angled rims are designed for players who have a specific problem related to an overbite (top teeth in front of lower teeth) or an underbite (top teeth behind lower teeth). The angled rim is only necessary to help with specific issues:
* A very low horn angle that makes it difficult to project your sound
* Too much pressure on your top or bottom lip
* Neck discomfort from tilting your head forward or back trying to correct your horn angle
* TMJ (temporomandibular joint) pain from thrusting your jaw forward.
* Difficulties forming and embouchure because of severe dental malalignment.

Angled rims do the following:
* Avoid distortion of inside of mouthpiece caused by bending a backbore
* Correct horn angle up or down depending on orientation
* Balance pressure between top and bottom lip
* Reduce strain and discomfort from pushing jaw forward.

Angled Rim Options
* Angled rims are available as a stock item for trumpet, cornet, and flugelhorn.
* The angle can be 5° or 10°.
* The 5° angle is enough for most players.
* If you are uncertain what angle you need, Dr. Dave can give you personalized advice based off of a photograph of you playing, taken from the side.
Ready to Shop Cornet Mouthpieces